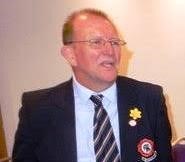 Continuing an occasional musical theme to try and head these now more irregular musings, today I stretch back to the great Boz Scaggs in the 1970s.

I trust you are all well.  To be fair there is a strong argument to start with the Sonny and Cher classic "I got you Babe" featured in the Bill Murray film Groundhog Day as there is a similarity between days for those under lockdown.

However, I hope you will have seen that the business of the Club is still being attended to, even if initially by deferral.  The Board moved into the virtual age with the latest meeting on Monday, wonders will never cease!  Tony McClure arranged for us to be in contact from the comfort of our respective homes to catch up on where we are up to.

Sadly, the curtailment to the season and social contact mean those events inked into diaries celebrating all that has taken place in the season have had to be postponed.  I would include events such as the players’ dinners, recognising achievements, and in particular the Mini and Junior's Presentation evening, which is always a special event in the Rugby Club calendar.  Although the chance to congratulate in person is delayed for now, I would like to again thank everyone who has played, coached, managed and supported this year.

We agreed we should postpone the AGM until restrictions preventing us meeting are lifted.  I am grateful that Board members will carry on working for the Club under Dominic in the intervening period.  Thanks to Phil Cooper for his time addressing our finances, for now.  With the assistance that has been provided by Government Business support we are OK.  I realise this is not a technical term but is hopefully a re-assuring one.  In saying that the position will continue to be monitored, we do not have the majority of our usual overheads, but we have no income.  Several people have made suggestions of ways to assist the Club and they may be required as there is no certainty as to when we will be up and running again.  There are many other issues that we will need to consider and update you on and the Board will look to do that.

The current mantra that "social distancing" will need to be maintained for some considerable time is a cause for concern.  There are moves to look at vaccines, there are moves for greater testing but there is uncertainty and limited information as to what this will mean.  Although I would claim that I have no idea how social distancing would work in rugby, some may say that I know perfectly well.  Those who have tried to follow my career, particularly I would claim in latter years, would have seen a perfect example of how to maintain a minimum 2 metre distance from attacking opposition players and the area where the ball was.  It is now something of a reassurance that rather being seen as unfit, lazy or inept I can claim I was honing my skills for times like these!

Following the rugby press, I noted a photo in the Rugby Paper today on page 27, someone who was never further than 2 metres away from play.  The photo is of Rob Andrew but on his heels with Peter Winterbottom is a young Peter Buckton.  I was also pleased to note the week before our 1990s cup win against Bath was in a list of great upsets, an exciting day.  Hopefully we can have similar excitement next season.

The other thing I recognised as I saw the smiling faces of the Board members all on one screen was that there was a reassurance being in a team.  While we may be called on as individuals there was knowledge that support was there if required.  It led me, you knew I was going to ramble a bit, to think about teams I have enjoyed being a part of in my time at Firwood Waterloo.

I mentioned last week Jack Graham's 6th then 5th teams that I spent the early part of my teens playing in, no mini rugby in those days.  Jack worked together a blend of youth and experience and I was looked after by great guys such as Pete Parisi, Roy Wilson and Norman Jackson in a team that benefitted from the guidance of the great Alan Ashcroft.  Guidance felt a bit like instruction, but you weren’t going to argue with a British Lion.

As I got older and higher teams were short of numbers, I was lucky to play in Second Teams, captained by Barry Pledger and Ian Taylor.  I realise now that I always seemed to be in need of a minder and in that era, and I guess for ever more my old friend Mike "Rocky" Connor seemed to take on that role.  I do recall a game at Headingley where I was subject to the attention of their second row's footwear, obviously short of dancing practice, while trying to claim a ball I thought belonged on our side of a ruck.  I heard this "whoosh" the dancing stopped and I heard a familiar voice say "You don't do that to kids", reassuring but a bit embarrassing when you are 26!

The one occasion I tried to reciprocate was even more embarrassing.  It was at Halifax, for some reason often a niggly place to play.  Mike was blindsided by his opposite number and I thought I would have to dive in and tell him to stop that sort of thing.  My actions were the only ones seen by the referee leading to what I think was the only yellow card of my career.  I looked to Mike for some sort of acknowledgement, I got it, "Don't you think I could have sorted him out?"  Abashed I had to recognise he most certainly could.  I realise I was talking about teams and have meandered but it is always worth it as he was a special man.

As I dropped back down the sides I continued to link up with and play in some really fun sides. The mid to late 1990s I was lucky enough to play in the Vet's Team brought together by Paul Coyne and Mark Flett.  We seemed to go everywhere looking for rugby, enjoyably on two occasions the coach driver got carried away and took us to Rome, at least that is how I remember it.

In the years that followed I joined Andy Walker's Third Team of many talents, the remnants of the Vets and some bright young things.  Again, as a break from league rugby Andy organised for us to go to the Isle of Man Easter tournament each year, which would have been fine if the tournament had not required us to play a second day.

In my twilight playing years I was lucky enough to catch up, no that is wrong as it suggests speed on my part, should I say the MGM kindly waited for me to make up the numbers.  Again a mix of the experience coaxed onto the pitch initially by Dave Bentham and then by the great double act of Bentham and Swain, and a home for younger players and those new to the game, many of whom have moved onto higher things.  I nearly said better but what can be better than playing for the MGM?

I realise that is a snapshot, there were more teams, I have been around a long time.  I have been lucky and I am sure what we want to do in these difficult times is support each other until there is an end to this problem.  Support those helping us and help them by following guidelines, and try and make sure there is a base for our sport when we can get back to it.

In the meantime, please stay well and stay safe.