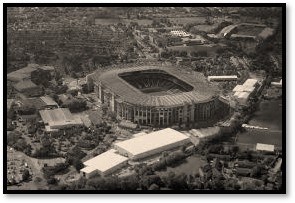 Credit for the revival of the club’s fortunes since 1974 goes to the efforts and leadership of Gareth Hopkin and Phil Mahon (not my words) and the blending of individual skills to the effective teamwork and an influx of new players from Cowley School and St Helens RUFC.

Waterloo was described as a young side with potential to become a great side.  They had the resilience to hit back when their cause seemed lost as Saracens, London Irish and Bedford can testify.

Steve Christopherson said, when asked, “We were as fit as any side in the country with strong camaraderie.  We defended well and given half a chance we would score.  During that 1976-77 season we scored nearly 1,000 points – and remember, only four points were awarded for a try in those days.

Our road to the final

Irish travelled to Waterloo for the original fixture but due to the fog and frost, the game was postponed, much to the annoyance of the travelling Irish.  The following Saturday, Ken Kennedy, the London Irish Captain and Irish International, also a doctor, claimed on medical grounds that the pitch was not fit.  It was then that team manager, Bob Atlay played his medical card to the surprise of Kennedy and the referee agreed that the game should start.  Atlay was aware that they were missing two key players and they did not want to play.  It was a hard-fought game where our defensive skills were fully tested.  Connor fought throughout with Irish International and British Lion John O’Driscoll – they both played for Lancashire together.  On that day Waterloo and Lol Connor took the honours.

Bob Atlay and Phil Mahon went to Yorkshire to watch our next opponents and came away convinced that we would beat a hard-grafting team that had little talent apart from the outstanding ability of Alan Old, England fly half who orchestrated their play with a great kicking game.  It was a game that we believed that we could win comfortably but perhaps complacency crept in and it became hard work on the day.  But our resilience in defence and tries by Mark Flett saw us home.

This was a totally different occasion – sunshine, at least 3,000 spectators and a visiting team that wanted to show its all-round rugby skills.  They were convinced that they were destined to win the John Player Cup.  It was a magnificent game, some would say that it was the best they ever saw at Blundellsands.  Midway through the second half, we are two scores behind.  With five minutes left we were in front with two minutes left they retook the lead again.  Wyatt, the Bedford wing scored a try and walking back said to Lol Connor “Good effort boys, but not good enough”.  Lol’s comment cannot be printed here.  Those who know him can easily imagine what was said.  In fact, I am surprised that Wyatt made it back to the halfway line.  From the restart they received and kicked back to us into our own half and after a few nervous exchanges of possession, Christopherson received the ball and scissored with Ian Ball – a piece of sheer brilliance borne from St Helens and Cowley School and Ray French coaching.  Ball the magician sidestepped and dummied his way under the posts at the railway end and the game was won.

Another big crowd and a sunny day at Blundellsands looking for a repeat of the Bedford epic.  It was not to be.  Saracens being Saracens were convinced that victory would be theirs.  We had to fight hard against a tough and uncompromising outfit – I believe that they thought they could bully us out of the game but our fitness and the excellence of our back row, Connor, Lunt and Hancock never gave them an inch.  With limited possession, we took our limited chances and our wings, once again scored our tries and a narrow and deserved victory was ours and we were on our way to Twickenham.

Our journey started by train on Friday morning straight to Euston and onwards by coach to the Richmond Hill hotel overlooking the Thames.  In the afternoon we paid a visit to Twickenham to familiarise ourselves with the pitch and the visitors’ changing rooms.  The evening was spent at the cinema watching ’The Eagle has landed’.  Watching a particularly bloody scene Frank Blackhurst commented, “All I can see now is green and white striped jerseys” (Gosforth colours).  A leisurely breakfast and a walk along the river killed off the time on Saturday morning.

The final started well for us and after 25 minutes we led after tries by Steve Christopherson and Steve Tickle.  Roger Uttley, the Gosforth captain and England and British Lion number 8 returned to the field after having stitches for a head wound.  Some mistakes by Waterloo led to Gosforth taking control.  The game went Gosforth’s way due to the strength of their back row, internationals Uttley, Peter Dixon and Dave Robertson the north of England player and the international scrum half Malcolm Young.  They also had Scottish international hooker Duncan Madsen who kept our own Scottish hooker Colin Fisher out of the international side on a number of occasions.

Our great journey ended with a great celebratory dinner at the Richmond Hill hotel with both teams and officials of the RFU. Tales of the night and the journey home and the welcome party at Waterloo will remain untold.  As in all rugby tales, what goes on on tour, stays on tour.