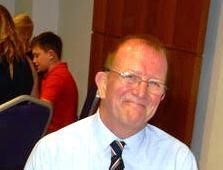 Not for the Aintree Iron, but for all your help over the last weekend.

It was a really busy weekend for the Club with the Fireworks Night on Friday and then the screening of the World Cup Final on Saturday morning.  Helping those events go as smoothly as possible involved a great effort from many people, probably too many to mention, so apologies if I miss anyone.

The Fireworks were nearly affected by a downpour of close to biblical proportions between 6.30 and 7.30.  My thanks to those stewarding, drawn from all sections, and to all those from our charity, Crosby Squadron Air Training Corps, for their efforts in assisting those in the community attending the event.  Also to all the staff who worked during the evening and to Steve and his team from Gillions for feeding our guests.  A thanks from me to St Michael's Church for the use of their car park, particularly helpful in view of the desire of people to park as close to the club as possible due to the weather, and to our neighbours for their understanding on the evening.

A busy night was extended by the need to set up for the World Cup Final.  Again thanks to everyone helping with that, to Phil Cooper for his early attendance setting up on Saturday, partially compensated by a late departure, and to Colin Reader of MSP Events who kindly supplied the big screen free of charge.

While Saturday's result was a disappointment, congratulations to South Africa on their victory, it was great to see the Function Room full.  Again Gillions played a blinder with breakfasts and all the bar staff worked brilliantly to keep everyone stocked up with refreshment, a day running through to an evening function.  It was nice to see a few faces I had not seen for a while, good to see Cecil van Onselen, although he was a bit too green shirted and had a few too many chances to shout "Bokka".  Also it was nice to catch up with Joe Hogan, back for the weekend from duty overseas, and many more.

Two events not just for the Club but hopefully also shared with the Community, suggestions as to what else we can do always appreciated.

For now spread the word and see if you can attend the Remembrance Service at 11.00am on Sunday and in a different vein why not encourage friends to join us on 29th November for the "Night at the West End" event.

On the subject of remembrance after being told of Tim Hunt's sad passing I was also advised that the funeral of Mike Watson is due to take place this Friday.  Not many of you may know Mike, but, through the good offices of John Wainwright, Mike helped the Club as a referee, first for the Juniors and then, when we set up a Fourth Team outside the leagues.  He covered both Saturdays and Sundays and was a great help and a good ref.  The family asked if there were any photos held of him officiating.  Not sure many cameras, or spectators, made it down to the "Fortress" on a Saturday but if any Sunday attendees have any please let Raychel in the Office know.

I also found out, I am not on social media as you know, that a group of members and friends, including the WOPS, have clubbed together to make sure that Tim Hunt has a proper send off, a kind gesture and one that is a credit to each of you.

Finally in this sadder vein I note the passing of David Foulds, who played in the 1960's before moving down South.  Rosslyn Park have asked if anyone would like to share any memories, if so please contact Pete Cureton.

Returning to rugby, as you know there were no games last Saturday, but the minis and juniors ventured out on Sunday.  I think most were away at Ormskirk, but I did catch up with the Under 16's entertaining COBRA touring from Wales.  It was good to see the Club full at lunch times  with a touring side and Firwood Waterloo group all looking the part and a christening to boot.  A very busy weekend for the staff, again thank you.

This weekend there is quite a bit to look forward to.  We have a Women's game at the Memorial Ground with the England Women's Deaf Team taking on a Firwood Waterloo Development Team at 2.00pm.  Not that many representative teams visit us these days so please make them welcome.

The Men's 1st XV travel to Warrington, I would urge you to check where the game will be played.  I understand that the Sports Club they have graced for the last few years have turned their affections to a football team leaving Warrington nomadic. I think that has affected them early season and they are a little lower in the league than I expected.  It is worth noting their recent results have picked up and I think we will be in for a tough battle.  I guess it stresses the importance of having a home base.

The Seconds re-start league action looking to return to winning ways against Vale of Lune at Hall Road while the Thirds have a free week and so will no doubt be honing their fitness in time for the visit of Oswestry the week after.

On Sunday, another busy day, as well as our Service.  We are hosting Southport minis and also three Lancashire Cup games, not sure which ones as I have typed this a little early, but Hall Road will be the place to be after the Service.

A further date to etch into your diary is 26th December.  I have contacted Crosby St Mary's and confirmed that the Boxing Day match is to take place, just to give those who are interested in playing but need a bit more honing fair warning!

I think that has to be all for now, thank you all again and enjoy your rugby this coming weekend.