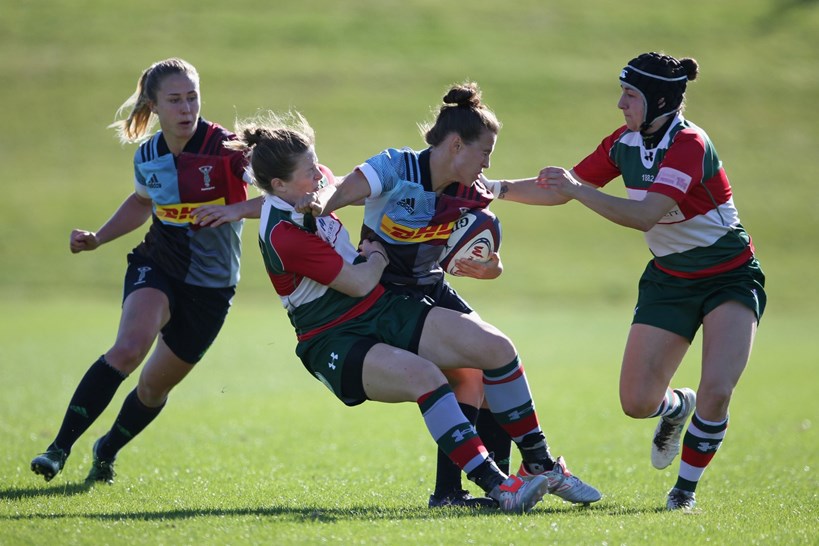 On a bright warm day, perfect for rugby, both teams tried to play in a manner that reflected the climatic conditions.
The home side opening the scoring after the visitors failed to exit their own 22 and Quins drove over from short range. 5-0
‘Firwood Waterloo failed to learn their lesson and coughed up the ball around the edge of a maul in their own 22, Quins again punishing them from close range. 10-0
The visitors then played their way in to the game and began to exert some pressure on Quins. A couple of unforced errors allowed the home side to relieve the pressure.
Firwood Waterloo were increasingly looking to threaten the Quins line and penalty kick was narrowly pushed wide.
In the dying embers of the half Quins made their last possession count and managed to dot down in the corner to end the half.
Firwood Waterloo started the second half strongly and scored an early 3 points as Quins infringed under the pressure created.
5 minutes later Quins again under pressure infringed and Beth Stott repeated from the tee. 15-6 to Harlequins.
Firwood Waterloo continues to press but the home side managed to scramble back to cover the line breaks the visitors were making.
Firwood Waterloo looked the more likely to get the next score to close the margin but with less than 10 minutes remaining, Quins scored out wide after good off loading.
Try converted 27-6
After a lengthy stoppage for a high dangerous hit that was adjudged to be only a penalty, Firwood Waterloo continued to try and play to gain another score.  This led to a late chance for Quins but the ball was knocked on close to the line and Waterloo kicked the ball dead from the scrum to end the game.
Final score Harlequins 27 Firwood Waterloo 6
Post match, coach Rob Tilsley, said “a few mistakes cost us dear, but today will prove a solid base on which to build for Gloucester-Hartpury at home on 13th October”
Tweet
Tweets by @WaterlooRugby