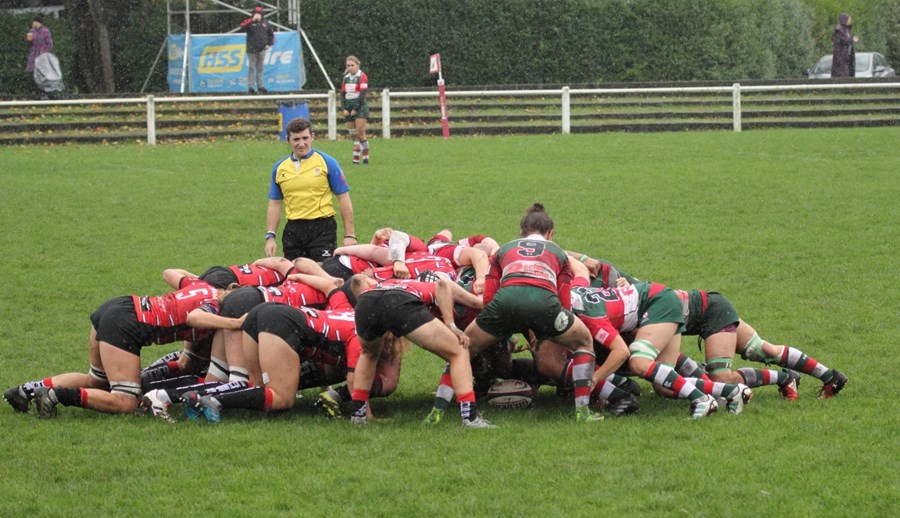 The tail end of Storm Callum lashed The Memorial Ground for the early kickoff and, in persistent rain and a strong end to end wind, Gloucester-Hartpury made use of the conditions to great effect in the first 40 minutes.
The first score from the visitors came after only 10 minutes when Kelly Smith breached the defence. Shortly afterwards, the home side failed to defend a powerful driving maul and the visitors pack crashed over aided by Bianca Blackburn who touched. 12-0
Two quick fire tries then extended the lead with both being converted and by 20 minutes in to the game it was looking a bleak task for the home side.
Millie Wood added a further try in the corner after Firwood Waterloo spilled possession, and Ellie Underwood broke through two tackles to score to extend the lead 38-0.
In the dying embers of the half Firwood Waterloo managed to find a stream of possession and Beth Stott kicked 3 points to close the half 38-3 down.
With the wind behind them, the home side stirred and found themselves constantly in the visitors final third only for errors to deny them point scoring opportunities on a number of occasions.
Gloucester-Hartpury defended well to prevent Firwood Waterloo and managed to breakout and Millie Wood pounced to score again. 43-3.
Firwood Waterloo continued to press and turned the ball over for  replacement winger Laura Richie to pick and run 70 m to score on her Premiership debut. The conversion was added by Stott. 43-10.
No further scores were added in the last 5 minutes and Gloucester-Hartpury left with all 5 points.
Tweet
Tweets by @WaterlooRugby