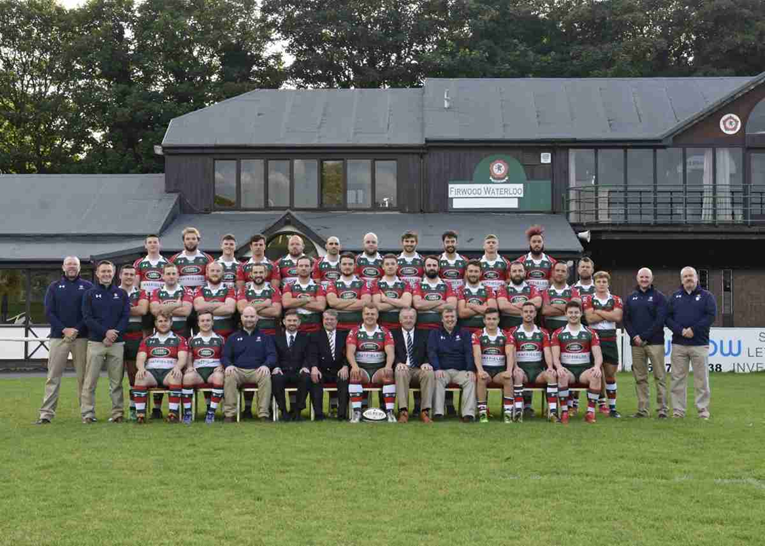 But with just three points separating the six clubs battling to avoid the third relegation spot, anything less would have been disaster.

"We played some good rugby this afternoon and showed just what we are capable of and although I more than pleased with the win we are still in a battle to remain in this league," declared head coach Stuart Turner.  "I said at the beginning of the season that this was a very competitive league and looking at the situation at the bottom of the table any of six clubs and possibly seven could be relegated along with Anselmians and De La Salle."

Firwood Waterloo opened with a penalty from Darragh O'Brien and followed that up with a try from Lawrence Jenkins who forced his way over after forward pressure had created the opportunity.  O'Brien slotted the conversion for a 0-10 lead.

Stockport hit back with a converted try, an exchange of penalties, O'Brien successful for the visitors closing the half Firwood Waterloo 10-13 ahead.

The home side took the lead with two tries and a conversion early in the second half but from turn over ball on half way, Alex Tenev hared away for his side's second try and with the Firwood Waterloo pack hammering away at the home line, Kurt Riley standing out in mid-field bustled his way over for the third.  O'Brien's conversion restored the visitors’ lead at 22-25.

Waterloo now had their 'tails up' and from a slick backs’ move from half way Connor Scrivens showed some good footwork to bring up the bonus score.  O'Brien added the conversion for a ten point lead before Luke Clifford sealed the win attacking from a scrum on half way to rack up the fifth.

Unfortunately Stockport came back with a late try to take a bonus point try which could prove crucial at the end of the season.

"With every point now so important we would have been better not to allow Stockport to take that last try," Turner conceded.  "However I do not want to take anything away from our performance this afternoon and hopefully it will give us more confidence as we go into out last two games."

Firwood Waterloo are at home to league leaders Carlisle this Saturday before travelling to Manchester in what is now beginning to look like a really 'crunch' game for the final game of the competition.

"These are certainly tough games for us but if we want to stay in the league we need to take as many points from them as possible," Turner emphasised. "We know we have an enormous task on Saturday at home to the league leaders but we are confident we can come away with something.  Hopefully, issues could be resolved next Saturday but I think it will all go down to the final games of the season.