On Saturday 11th September, Firwood Waterloo made the 60 mile trip to the north western gateway to the Peak District to face Glossop, but were narrowly edged out by their hosts 31-24 in a tense yet entertaining match.

For a second consecutive week Firwood Waterloo faced a side who set the pace in North Two West in the last playing season, losing only twice and drawing once.  Although last week they did not have things their own way in their first game at level 6, drawing with Altrincham Kersal.

Played in a very competitive spirit, early ‘Loo pressure was matched by some impressive mauling from the home side, but on fifteen minutes a break by the visitors saw James Ratcliffe cross the line with Daragh O’Brien adding the extras for a 0-7 lead.

The second highest scorers in North Two West responded well through their powerful forwards, making room for a kick and chase, leading to a score in the corner.  The difficult conversion went over off the post, with some assistance from the breeze to make it all square.

Trading scores continued with ‘Loo resuming the lead with a long range penalty, only for Glossop’s forwards’ domination to lead to a superb try which was converted for a half time score of 14-10.

Firwood Waterloo recognised that they would need answers in the second half to Glossop’s forwards and responded with a fine break from No 8 Jack Weare to enable Josh Jenkins to score, with O’Brien adding the extras, 14-17.

Glossop showed why they will cause problems to many teams this term with a chip through and chase for a try, following that up with pushing the ‘Loo pack off the scrum for a strong lead 28-17.

A quick tap and go and an offload to Matt Tindall to score a try reduced the deficit to 28-24.

Glossop’s well-drilled restarts again continued to cause problems for Firwood Waterloo and a penalty kept the home side’s scoreboard ticking along for a final score of 31-24.

After the match, Head Coach Sean Fletcher commented, “Glossop were the deserved winners, they took their opportunities at key points in the game and we didn’t.  On a plus side, you must come away with some points from an away defeat and we did that with the losing bonus point.”

The travelling supporters enjoyed their first trip to Glossop adding that they enjoyed visiting a proper rugby club with a friendly atmosphere and great beer.

And in an update to the injury sustained in last week’s match, Charlie Harrocks faces a possible two months on the side lines.  We will know more after an MRI scan later next week.

Next Saturday Firwood Waterloo host Carlisle who got their league campaign off to a good start with a narrow win against Altrincham Kersal.

Report written with the grateful support of the travelling faithful. 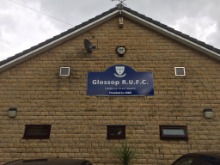 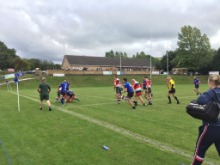 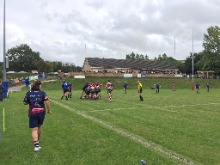 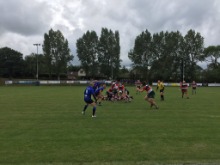