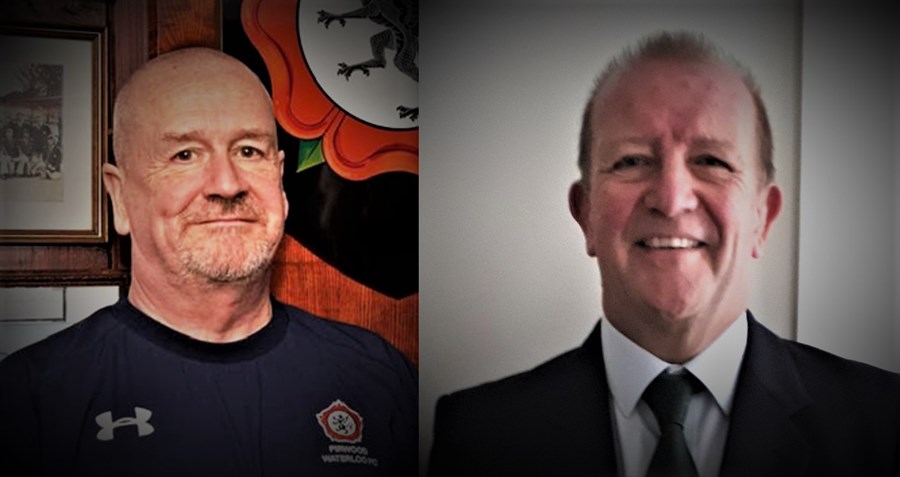 At a time of changing roles, we wanted to give both Paul Weare and Dave Crank the opportunity to address members and the wider community – for Paul to say welcome and for Dave to reflect on his term of office.

Let’s start with an introduction from Paul

I am deeply honoured to have been elected as our great Club’s President for the next two seasons and have a great deal of work to do to mirror the work undertaken by our previous Presidents inclusive of David Crank Esq.  I would like to thank him for all his efforts and guidance over many years.

I will continue to work alongside all members of the Board, in assisting the running of the club and across all sections of rugby.

I will offer whatever support and guidance I can throughout the club, to Board Members, Club Members, Parents and visitors alike.  I will strive to build upon the relationships established in our local community to date from within the Club and hopefully, develop new relationships.

I will look to improve the communications within and throughout the club, keeping all members, players and parents of the Mini and Junior Section, informed of what is happening within the club.

On behalf of the Waterloo Past Presidents it is my pleasure to welcome our new President Paul Weare who will hold this position for the 2021/22 and the 2022/23 seasons.  I thank all members of the Club for accepting our nomination.

We are fortunate once again to be able to appoint a long serving Waterloo man who has a true love for the Club, a love that is very much shared with his daughter Abby and of course son Jack who has recently been our Club captain.

Paul’s association with Waterloo started in the September of the 1994 season when he brought  4 year old Jack  along to have his first sessions with the under 6 age group.  Paul was very quickly encouraged to join the coaching team and continued to follow his son’s team all the way through to Colts level.  As Jack moved into Senior rugby, Paul became 1st XV manager and was able to continue to watch his son’s progress

For the last five years Paul has served the club by being a member of the board and also by running the club shop.

Through his long service be it in coaching, committee work, hands on manual work or administration, Paul has become a well-known member of the Waterloo family and I am sure he will be welcomed by all sections of the club.

I had the pleasure of ringing Paul to ask him if he was willing to accept the position of Club President and I was able to feel the emotion pride and delight as he answered “YES”.

Paul has a difficult task to follow the amazing job our last President Dave Crank did but I am confident as are all the Past Presidents that he will be up to the task and be a dedicated and inspiring President of our Club.  We wish him every success and a lot of enjoyment in his new role.

Dave Crank’s term of office may have run its course but we are sure that we will continue to see a lot of him at the Club.  Your scribe has had the pleasure of posting more than 70,000 words from Dave and he is sure that you will agree that each of his ‘epistles’ have conveyed the mood of every occasion perfectly. This piece is a perfect coda to his time as President.

Three years ago I followed the Champagne Supernova that is Mark Flett to become President of Firwood Waterloo. Despite all that has happened in the world since then, I have to say the time seems to have flashed by, for me that is, not for my other reader . . .

Pete Cureton made the mistake of asking me to write a few words about the experience, couple of hundred words he said.  Three years on and he still doesn't know me!  "Dream" by the Everly Brothers comes to mind.  You may not have noticed but I like to introduce a musical theme when I can. I thought about a line from "My Way" but realise I followed a pretty well-trodden path looking to promote the Club when I could and looking if there were ways I could help others move the Club forward.

I should say now in case any flippancy obscures it later, that it was a tremendous honour to be asked to be President and to have the chance to help represent the Club.  I know from my time here there have been some hard acts to follow.  I started to name them all in my head but there are so many.  They are all on the Honours Board in the Player's Bar and they speak for themselves, tough acts to follow.  I guess the hardest and most poignant one for me was my Dad.  It was not a competition you understand, although it  was always a challenge to match his calmness and good humour, but an honour to give it a go.

I am conscious I slightly overstayed my welcome, this is usually a two year stint.  It did not seem fair to ask anyone to step up over the last 12 months and there was the chance, sadly borne out by events, that I might go a whole season as President of the Club when the Senior Men's and Women's teams were undefeated!.

Looking back over these years I realise I have a lot of people to thank for their support.  That there was support came as no surprise, it is one of the reasons for being at such a great rugby club.  I also realise in that in naming some, I could and probably would miss out others, so I will seek some cover in dealing in groups.  I thought at first of the various Board members during my stint, then the Past Presidents, particularly the more immediate ones on match days, but also some of the more senior Past Pressies for their encouragement, kind words and experience.

There are then all those working for and with the Club during my stint who have made match days work, made the lunches and events great occasions and have prodded me when I have needed to get things moving and have made our visitors really welcome.  Speaking of prompts there was Simon Yarwood and his team at WTP making sure some "thoughts" made it into the programme.  Also all those who sponsored the Club and events at the Club, it was great to meet you.  Part of the president's "job" is travelling to opposition grounds.  On the Men's side there would always be the company of Awaydayers and on the Women's the parents and the support team providing a boost in "enemy" territory and having a bit of fun as well.

Also my thanks to Pam and the rest of my family for their  brilliant support, in particular letting me out "to play" on so many occasions over the last few years, it really was appreciated.

Moving on to the playing side, I could never tire of praising those who make the rugby work in all sections of the Club. I have seen the effort that goes in from those coaching and managing, administering, training and playing.  It is a definite perk of the job to be able to wander around and just observe all that goes on. I think the last year has been even more impressive seeing and hearing of the various groups encouraging each other and providing some support and focus at a difficult time. The individuals who have continued to help in the Club, on Sundays as well as Saturdays, long after their children have passed through the Mini and Junior section I feel deserve a special mention here, but it is the effort of everyone who turns up and turns out that makes the place tick..

Although the seniors were not able to play this season it was good to see some rugby in April and May.  I particularly enjoyed watching a strong performance by the Colts against Sandbach and then watching the Under 15s battle back to within one score out of 93 points, despite only having 13 players when opponents Caldy were able to rotate among 20.  As is often the case, the disparity made the lads more determined and they finished the stronger.  Such effort will bring reward, the future of the Club shows promise.

So going back to the music theme I could finish with one of my favourites, the Saw Doctors with a lively rendition of "I'll be moving on" because I am.  It was good to see so many at the AGM, protected by Tony Pugh's Sentinel machine with Paul Weare appearing like a spirit of Zoom and Club Captain Luke Clifford giving a celebrity chef demonstration.  Respect was paid to those we have sadly lost since the last AGM.  Then after that moment of sustained reflection there was positive news on club finances and in reports from each section, things to build on.  I hope and am sure there is a lot to look forward to. There is work to be done before we open up again and the enthusiasm of volunteers to help with this is again heartening.

My mantle will be taken on by Paul Weare. I am pleased for him as like many he has contributed a great deal to the Club and I am sure will be a great ambassador over the next two years.  I am confident you will all support him as well as you have me.  All the very best Paul in your time as President.

So ending this note and my time brings me back to the start. Some of you, especially the curious ones with small children in the 1990's, might recognise the strapline, irreverently referred to by some as the Arsène Wenger song, it is the opening line to the Lion King's Circle of Life. I move on but think I see a circle of rugby life, particularly seeing two people that I helped Bob Turner coach as Colts 30 years ago join the Board and looking to them, and all of us, to build on what we have and enjoy ourselves doing it.

From me it is a big Thank You and I now look forward to seeing you all next season. Enjoy your Summer and stay well.

We could not let the occasion of Dave’s term office ending without a reflection and acknowledgement from a Club elder.  Dr Bob Atlay DL, distinguished former club president and director of rugby added:

When David Crank was the Past Presidents’ nomination to the AGM 3 years ago, give or take, the support for him was overwhelming.  The Club knew it was in very good hands. How right we all were and he has ticked all the boxes for having done the job to the highest standard.

We should have known from his gene pool that this would be the case.  Albert Crank, David’s father (a great friend of all the seniors at the Club) was a Waterloo man thro’ and thro’ as a player at several levels and, of course, as a memorable President; so the stage was set.

David’s term has been savaged by the Covid 19 era and all the sequelae that it produced yet, without doubt, he has salvaged everything possible - in spades and with style.

Our image outside of the Club has been greatly enhanced by his dedication and social skills.

And to his credit, he has learned Fletty’s Latin grace off by heart!

Happy days David, to you and yours with our sincere thanks. Très bien fait.