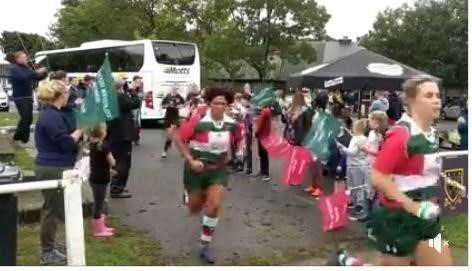 The development of the side through the pre-season under the direction of new head coach Giles Heagerty was evident in the team's opening Tyrells Premier15s game against league Champions Saracens.

The Merseyside team had more structure in the backs and showed flashes of brilliance in attack, demonstrating how dangerous they could be. However, the side was unable to stop the free-flowing attacking rugby of the well drilled Saracens side.

Opening play saw the ball change directions several times with both sides testing each other’s defence. However, Saracens maximised on the discipline mistakes by the home side and a catch and drive from the lineout saw Poppy Cleall go over the line for the opening try of the game at 12 mins, 0-5. She was able to go over the whitewash in quick succession and make her second try of the game this time converted to 0-12.

Firwood Waterloo pushed back and managed to camp out in Saracens half but once they had ball in hand they quickly gained ground. There were moments of gifted play from the Blundellsands side including the try saving pass interception by Perris-Redding but as the pressure built the visitors were able to make the score 0-19 by half-time.

The team talk must have made a difference as the Firwood Waterloo came out -eager to get underway making Saracens work hard for the ball and forcing handling errors with knock-ons, forward passes and balls being thrown into touch ensuring turned over possession. But the home side could not provide a solid base for play from their set-pieces and on many occasions, Saracens retained possession.

By 75mins Saracens had scored twice more,0-31, but too late Firwood Waterloo Women came alive. A knock on from Saracens and solid scrum from the home-side ensured the ball pass quickly through substitute scum-half Porter’s hands down the line through Delany to Perris-Redding who sprinted 40m down the line, handing off Saracens players, scoring the first try of the season. Unfortunately, Stott’s kick hit the woodwork and the score stood at 5-31.

The team quickly attacked from the re-start and a solid catch and run by centre Perrin quickly gained Firwood Waterloo 50m. A quick pass out the tackle found winger Temple’s hands, whose chip down the field was grounded by Saracens, given them the 22m drop out. Now in injury time the visitor’s depth and pace resulted in a breaking run by Clapp allowing Lingham to score to closeout the game. At the final whistle Firwood Waterloo Women 5 – Saracens Women 38.

“It was a frustrating performance as we showed glimpses of what we were capable of but were far too inconsistent particularly at the set piece and in our ball retention. But, those glimpses give us something to build on as we prepare for Richmond next week.”