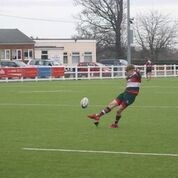 In the Colts first game of 2019, the squad spoke openly and honestly in the dressing room post-match about their contrasting performances in each half. The first Half saw the very best of this committed athletic group of talented individuals.  They hassled and pressurised the opposition into mistake after mistake and when in transition, the players then picked the right decision, made passes to the space in front of the on rushing support player coming from either side with pace.  Some great tries were scored with the good crowd thoroughly warmed on a cold but bright afternoon.

The ball did bounce favourably for Firwood Waterloo on more than one occasion resulting in tries run in from at times from 70 and 80 yards with the 2 wingers (Shea and Stuart) scoring 4 tries between them in the first half.  Others followed from Mutch and an electric break from Skea.  The first was scored though by one of the two Welsh Exiles when Rhys Hamilton touched down.  Six conversions flew over from the ever reliable McQueen.  Did Firwood Waterloo play well and deserve the scoreline? – Absolutely.

What would the second half bring as the squad spoke at the interval of the opposition wanting to improve?  Sandbach didn’t disappoint and raised their game considerably in the second half.  This encouraged their vocal support who were wonderfully appreciative of both sides throughout the match.  Did Sandbach play well in the second half and deserve the spoils? – Absolutely

But Firwood Waterloo players will learn more from the second half and what they produced as a team.  In the first half they produced some of the best rugby of the season. For Joe Stuart to score 4 great tries was a wonderful achievement for him personally, but a great credit to his teammates around him.

Well played and we look forward to the Home match v Chester on Sunday 13th Jan 2019.