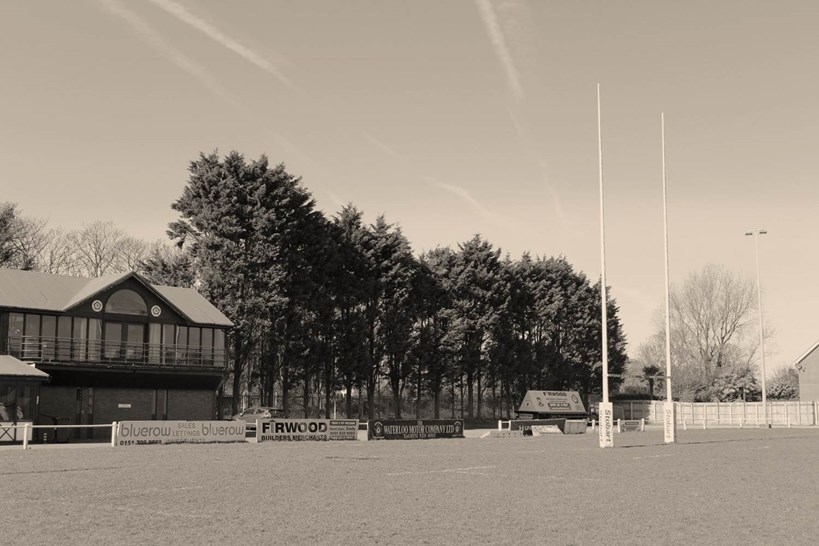 On 16th March 2021 Firwood Waterloo Rugby Club will celebrate the 100 year anniversary of the first game to be played at The Memorial Ground.

We have started to plan our celebrations, but let’s consider how it came about that the club was situated in leafy Blundellsands.

It is not disputed that the Club’s original ground was near the Serpentine, Blundellsands in 1882 and inspired the name of The Serpentine club.  Audrey Jarvis Cureton in ‘A view from Boozers’ Bank tackles the differing reports of where games were played.

One version says that the club moved to Manley Road, Waterloo in 1884 after, as Waterloo historian Ian Hamilton-Fazey stated in the Crosby Herald (20th November 2003), “…club officials were falsely accused of poaching by a disgruntled gamekeeper as they filled in rabbit holes one moonlit Friday ready for the next day’s match.  Evicted, the club relocated to a field off Manley road, Waterloo and renamed itself.”  The other version was that the club relocated to Haig Road, Waterloo, the former ground of the Northern Cricket Club, and from 1906 the name was changed to Waterloo.  Waterloo RUFC is now situated in St Anthony’s Road, Blundellsands. This ground, known originally as The Memorial Ground in honour of the fifty-one club members who lost their lives in the Great War, was opened in 1921.  The Crosby Herald of 17th December 1921 reported the unveiling of the War Memorial Tablet which was installed over the fire place in the pavilion where it still hangs today.  The article includes the words of the President of the club at the time, Mr T.B. Schofield, who said, “….the real War Memorial was the ground itself but the tablet had been erected as a lasting regard to those members of the club who fell in the Great War. He hoped that gentlemen and players when they looked upon it would “play the game” not only on the field but in their daily life.”

The reasons for the move back to Blundellsands are unclear, but the late and very sadly missed Ian Hamilton Fazey, a former player and journalist at the Financial Times and Liverpool Daily Post takes up the story:

The club moved back to Blundellsands, not far from its original home by the Serpentine.  Now it was Captain Blundell who owned the land and who sold it so it could be turned into a two-pitch permanent rugby ground.  The only problem was that the site was part of a nine-hole course forming part of the West Lancashire links.  Although attached to the golf club it was open to the public and was known as Hunt's golf course after the people who ran it.  Sammy McQueen remembers that it cost 1s a round to play on it, a fee which in those days was considerable enough to ensure that its clientele was confined to a relatively small number who could afford it.  Why being part of the links was a problem arose from the uneven terrain, which was dotted with numerous bunkers. Levelling it to create two flat pitches was going to take a lot of time and money.  As it was, the club was borrowing from the Rugby Football Union, and Lancashire.  Its own members were putting up a great deal of money too, but membership was small, mainly players and ex-players, and there were few supporters to tap for finance.  A policy of do-it-yourself towards the work was the only one the club could afford.  Dawson Hay Ward, who was to become secretary for a time after the move to Blundellsands, served his apprenticeship as an organiser and club workhorse in the work parties that had to be formed to do the job. He recalled, more than 60 years later: "Tom Brakell did an enormous amount of work on the project. There were so many bunkers to level off. Every Sunday afternoon there was a major work party. If there was a moonlit night we would also work then."

The work took 14 months and the ground opened in March 1921.  Waterloo had its Memorial Ground and it was to be known as that for years to come, though sadly, perhaps, the use of the name has gradually receded in recent decades, with Waterloo's home known universally simply as "Blundellsands".  In 1921, the ground, the stand and the pavilion were among the best anywhere. The playing surface in particular was envied everywhere. Waterloo had the Rolls-Royce of grounds.

So the club had a fine ground and a team, they just needed an opposition which came from local club Liverpool (now merged with St Helens).  The programme contains some fascinating insights into the game 100 years ago.  The entry fee is shown as two pence, around 50p in today’s terms, around 1% of then average earnings.  To keep up with inflation over the last 100 years, the current admission charge should be £250 which has the full support of the club Treasurer!  (It is only £5 by the way.)   It is interesting to see how the shirts were numbered then, starting with the full back at 1.  Nowadays, the full back is number 15 and it is believed that this was started around 1960.  And the scoring still reflected the origins of the game where touching the ball down over the line gave the team the opportunity to “try” to kick a goal.  The team colours are shown as green, red and white stripes.  We now play in the much more elegant scarlet, myrtle and white.  By the way, Waterloo won with captain Dicky Heywood putting in a match-winning performance.

Here is the programme 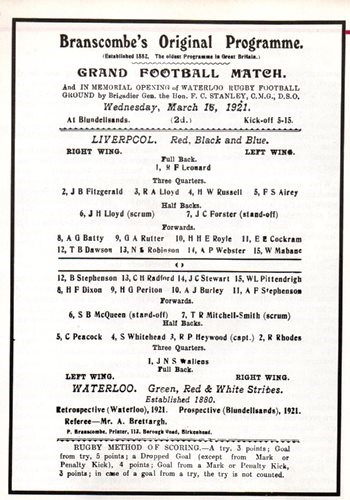 And here's the team